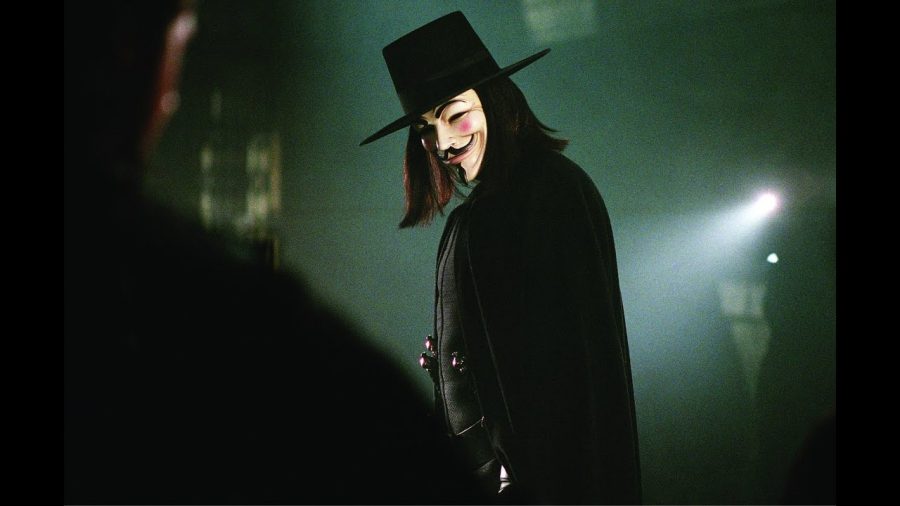 V is for Very, Very Extraordinary, and is also Vendetta

Vendetta - noun a blood feud in which the family of a murdered person seeks vengeance on the murderer or the murderer's family; a prolonged bitter quarrel with or campaign against someone.

V for Vendetta is a movie based on a graphic novel published on March 17, 2006 by James McTeigue.

Though it has been out for a while, it is an important film given the state of our country.

V for Vendetta is a dystopian  action movie taking place in a future dominated by a tyrannical British empire which is based on religion and war.

A rebellious mystery man by the name of ‘V’ is the main enemy of the tyrannical government.

The story takes place in a near future where a fascist British government has taken over the world, and now rules with an iron fist.

It follows the protagonist, Evey Hammond, and V, a mysterious rebel who wears his signature Guy Fawkes mask, which you may recognize as the mask was used by the hacktivist organization called Anonymous.

Hammond and V fight against the tyranny of the new regime and V sets out to save Hammond. Adding to the uniqueness of the character, V has mysterious methods of communication.

The actors, Natalie Portman and Hugo Weaving  amazingly portray these two characters. Natalie Portman brings to life Evey, and brilliantly depicts all her emotions during these scenes. In an Interview with BBC, Portman stated,  “It was very interesting for me to consider the mindset of someone who goes from being non-violent to being drawn towards using violence to express her political beliefs”.

Hugo Weaving, who portrays the character, ‘V’ depicts a mysterious rebel and is stellar performance as he talks in riddles and puts on a somehow emotional and emotionless performance all at the same time. In an interview with IndieLondon, Weaving gushed about his character.  “He’s a very dashing, charismatic, romantic figure but he’s also a twisted, damaged, human being. He’s ultimately just an idea, not really a human being”.

The antagonist of V is for Vendetta, is Chancellor Adam Sutler, who is brought to life by John Hurt. He, too, does a great job portraying a tyrant. Even the minor characters acting is done amazingly, from the corrupt police in the beginning to the innocent bystanders.

There is not a bad or in conceived scene in the movie. The fight scenes are immaculately choreographed, and so are the calmer scenes. As with most dystopian novels and books, the feeling of dread grows and is overwhelming by mid-ay through the movie. This dread will cause the audience to rethink reality and graphic novels. No scene should be missed.

This movie’s plot is singular suggesting that bystanders who do not act for the good of humanity will suffer consequences and to ignore pain and suffering will be dire to the person who does.Being a non acting bystander is equivalent to wearing a mask. “Beneath this mask there is more than flesh, beneath this mask is an idea, Mr. Creedy. And ideas are bulletproof.”

People in their mid-teens would enjoy this movie as will anyone who enjoys a good dystopian movie. While the trailer is for “All Audiences” this movie is specifically not recommended to young children due to the violence that often is a key component of futuristic dystopia movies. The Motion Picture Association of America, MPAA, rated the movie R for violence and language.