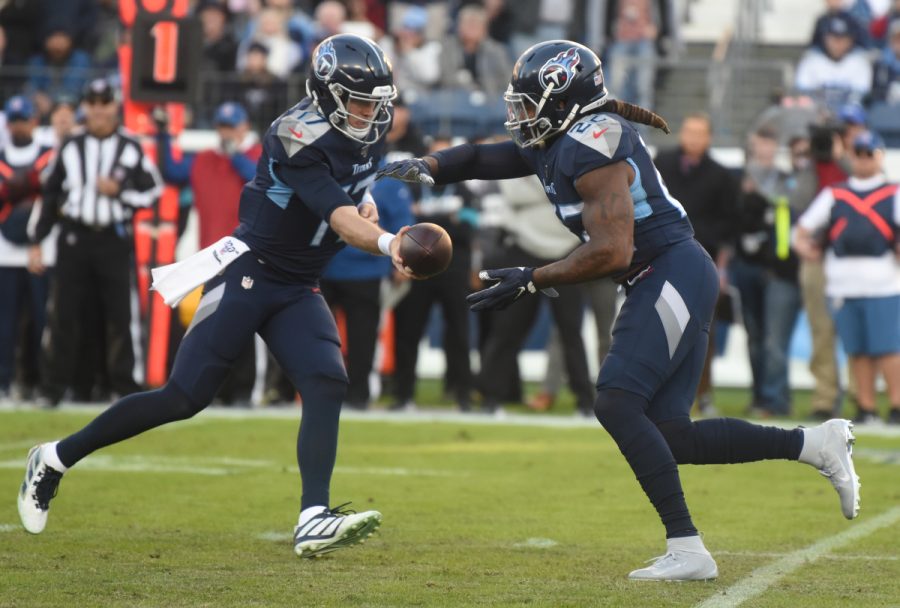 With Henry, Titans ready to mash through playoffs

NASHVILLE, Tenn. (AP) — The Tennessee Titans have made it clear they are very willing to mash their way through the postseason with the NFL’s top rusher leading the way.

Derrick Henry followed up his career-best 1,540 yards in 15 games in the regular season with the best postseason running performance in franchise history with 182 yards. The Titans (10-7) are more than happy going a bit old school with Henry, a stingy defense and an All Pro punter in stunning the New England Patriots 20-13 on Saturday night.

Coach Mike Vrabel, fresh off winning his postseason coaching debut, said Sunday the Titans understand how important running is especially in the playoffs with Henry and this offense.

“Derrick trains and prepares to be able to handle that load, to carry that load,” Vrabel said. “He’s got a certain skill-set. That’s size and strength and speed, durability. Those are all great qualities for a running back in January. So he’ll do everything that he has to to get ready and to do whatever it is that we ask him to do in the game plan.”

Now the Titans are onto Baltimore for their second divisional game in three seasons where the rested Ravens (14-2) await with the NFL’s best record.

“We know exactly what we’re facing, we know what type of team they are — they’re the No. 1 team in the (NFL) so it’s self-explanatory,” Henry said of the Ravens.

The run game. The offensive line pushed the Patriots off the line of scrimmage, and Henry had room to run. Tennessee finished with 201 yards rushing, second-best in franchise history. Henry was part of the previous postseason best two years ago when the Titans piled up 202 yards rushing in a wild-card win at Kansas City. Only the Ravens ran for more yards (210) against New England this season, which had been sixth against the run.

Kicking field goals. Still. The Titans were the NFL’s worst in the regular season making only 44.4 percent of their field goals, and their fourth and current kicker Greg Joseph has yet to even attempt a field goal in his three games.

Vrabel passed up trying a long field goal in the fourth quarter, choosing instead to chew time off the clock with a couple of penalties before a neutral zone infraction by the Patriots. Vrabel then let All-Pro Brett Kern punt and trusted his defense.

Henry. The 2015 Heisman Trophy winner dominated as he accounted for 75 percent of the Titans’ offense. Henry not only set postseason franchise records with 34 carries for 182 yards rushing, he gained 204 of Tennessee’s 272 yards of total offense. In the Super Bowl era, only two other players had a bigger share of a team’s total yards in a playoff game: Eric Dickerson with 77.2% for the Rams against Dallas on Jan. 4, 1986, and Larry Brown with 76% for Washington against San Francisco on Dec. 26, 1971.

He also had the second-most yards on the road in the playoffs since 1950. Only Freeman McNeil ran for more with 202 yards for the Jets at Cincinnati on Jan. 9, 1983. Henry also topped his own postseason franchise mark of 191 yards from scrimmage set in 2018 at Kansas City.

“He’s so hard to tackle — the offensive line did a good job of creating some creases for him,” Titans quarterback Ryan Tannehill said. “There at the end, they were loading up the box and he’s still able to get positive yards.”

Tannehill after his worst performance yet for Tennessee in his playoff debut. He’s now 8-3 as a starter but completed only 8 of 15 passes for 72 yards and a touchdown. He also was intercepted and fumbled twice — recovering one himself with Henry falling on the other.

Linebacker Jayon Brown was limited to 10 snaps after hurting his shoulder. Vrabel said only Sunday that Brown was sore.

0 — Points allowed by the Titans’ defense in the second half to the Patriots. Tennessee has allowed an average of 13.5 points over the past two weeks in clinching a playoff berth and ousting New England. The Titans are looking much more like the unit that didn’t allow more than 20 points through the first seven games this season. Tennessee has held opponents to 20 or fewer points in 11 of 17 games.

Go to Baltimore on Saturday and do to the Ravens what they’ve done to Tennessee twice in the past in the divisional round.