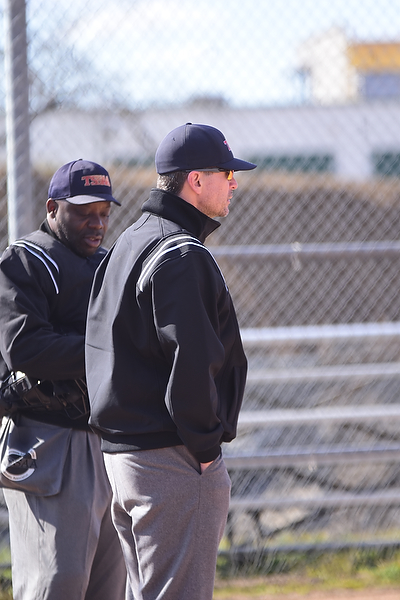 “A couple years ago, a friend of mine was working a sub-varsity game,” Breedlove tells the Tulsa World . “One of his first-year guys was with him, since you try to work veterans with less-experienced officials to help teach them. Well, this guy comes to my friend at halftime. I guess they’d had a rough first half.”

A pitiful fact about football and most youth sports: the younger the kids playing, the worse-behaved the adults watching. The adults direct their tantrums at the kids and at each other but unleash their most juvenile outbursts at officials.

“The guy takes off his officiating hat. He takes off his whistle. He takes his flag out of his pocket,” Breedlove continues, “and he says, ‘Here. You can have these. I didn’t sign up for this.’ And the guy leaves the game.

“This gives you a thumbnail sketch of what’s going on in the world of officiating high school football. Whether it’s Tulsa, Oklahoma, or Tallahassee, Florida, or Bozeman, Montana, it doesn’t make any difference. It’s the same. That’s what’s going on.”

Referees are fleeing the profession.

A Google search reveals crises in Alabama and Tennessee, Illinois and Missouri, California and Florida. The National Federation of State High School Associations recognizes the problem on its website, where it asks would-be officials to enlist and fans to chill so that referee recruits might stick around.

“They say it’s a tough gig taking mental and sometimes physical abuse where a simple call can become a brawl.”

“Right now, we are at 992 officials,” reports Grant Gower, director of officials for the Oklahoma Secondary School Activities Association. “That’s down from about 1,100 last year.”

The trickle of recruits doesn’t keep up with the outflow of resignations or retirements, and so organizations like Rolen’s scramble to staff games.

“You have to pretty much absolutely love it or you’re just not going to do it,” Breedlove says.

And there’s the problem: It’s difficult to love it when you’re catching hell for it as a rookie at those grade school games.

Consider this report May 17, 2019 special report by Fox New 17, a local Nashville news station featured a story that highlighted the impending shortage, which many officials who are quitting blame on the abusive parents in the stands.

“They say it’s a tough gig taking mental and sometimes physical abuse where a simple call can become a brawl.

Spectators see them all the time losing their cool, some looking like a WWE showdown. Yet, it’s just another night of kids’ sports. Referee Bronson Reaves is calling a time out and leaving his basketball side gig.

“It takes a toll on you not just physically, but mentally as well night in and night out taking the verbal abuse in the manner that you are,” Reaves said. “We had to throw a fan, a dad, out at a middle school game,” Reaves said. “He was out there at the door with his hat turned around backwards and he was challenging me (gestures with his fists) to come and I suppose fight him. My fear is that it becomes physical.”

“They used to call them helicopter parents. Bulldozer parents might be more appropriate,” Breedlove says. “They bulldoze every obstacle, they think, to their child’s well-being. They’re out there to run the show, so to speak.”

Maybe they would act differently if there was no show to begin with.

TSSAA, a member of the NFSHSA,, is looking for creative solutions. They are having to be creative, and are working hard with school districts and fan control to avoid referee shortage.

They are investing in outreach, such as the program Inside Out which partners with the Tennessee Titans promoting sportsmanship at all games. Creative solutions may lie in less traditional demographics like older teens and women. They are establishing mentor programs, such as the one featured here about the class students can take as an elective at Science Hill High School.

All of this sounds encouraging.

“It’s all about the game. And then the camaraderie, too. Being with your crew Friday night, those other four guys, is just wonderful. It’s the ultimate bonding experience because you don’t have any other buddies out there.”

It is important to remember that official are an intrinsic and important component of every youth competition.

We weren’t really sure how many students would even be interested. We had over 120 students … we may have to increase the number of classes next year.

The hope was for student interest.

“We weren’t really sure how many students would even be interested. We had over 120 students; we only have one class this semester and one next, so we’ll probably just get half of them, but if the interest is still there, we may have to increase the number of classes next year.””

The response was overwhelming.

And the classroom? Well, that’s the playing fields.

When Keith Turner and Scottie Whaley brainstormed in the spring about adding a course at Science Hill High School that would teach officiating of myriad sports, they wondered if it might intrigue enough students to fill up a classroom.

They got so many interested students that not only did Science Hill this school year launch its fledgling new program but it already has pondered a future expansion. It is believed to be the state of Tennessee’s first-of-its-kind class to teach sports officiating in high school.

“Basically, our concept was with the national shortage of officials, and a national shortage on teenage-type jobs, we felt like we could create a niche there and start getting some of these students who could take it as an elective class,” said Turner, athletics director at Science Hill, which boasts one of the largest enrollments in northeast Tennessee. “We are trying to train them and get them ready to pass the officials’ tests in multiple sports.

Added Whaley, the Lady ’Toppers basketball coach, “We were like, ‘Gosh that’s a lot of kids.’ But it’s been good. The class I have is very diverse. We have soccer, basketball, football, cross country, wrestling and softball athletes in it. We’ve got a lot of different sports represented. We’ve got 28 students this semester and we’ll probably have 28 to 30 next semester. If it keeps growing, we’ll hopefully add another class.”

Students are receiving class instruction on a variety of sports, with a course curriculum approved earlier this spring after Science Hill officials submitted the proper documents to Tennessee’s Department of Education. Alabama, they said, was the first state to adopt an officiating class as an approved elective course; some other Midwest states have since followed the move. 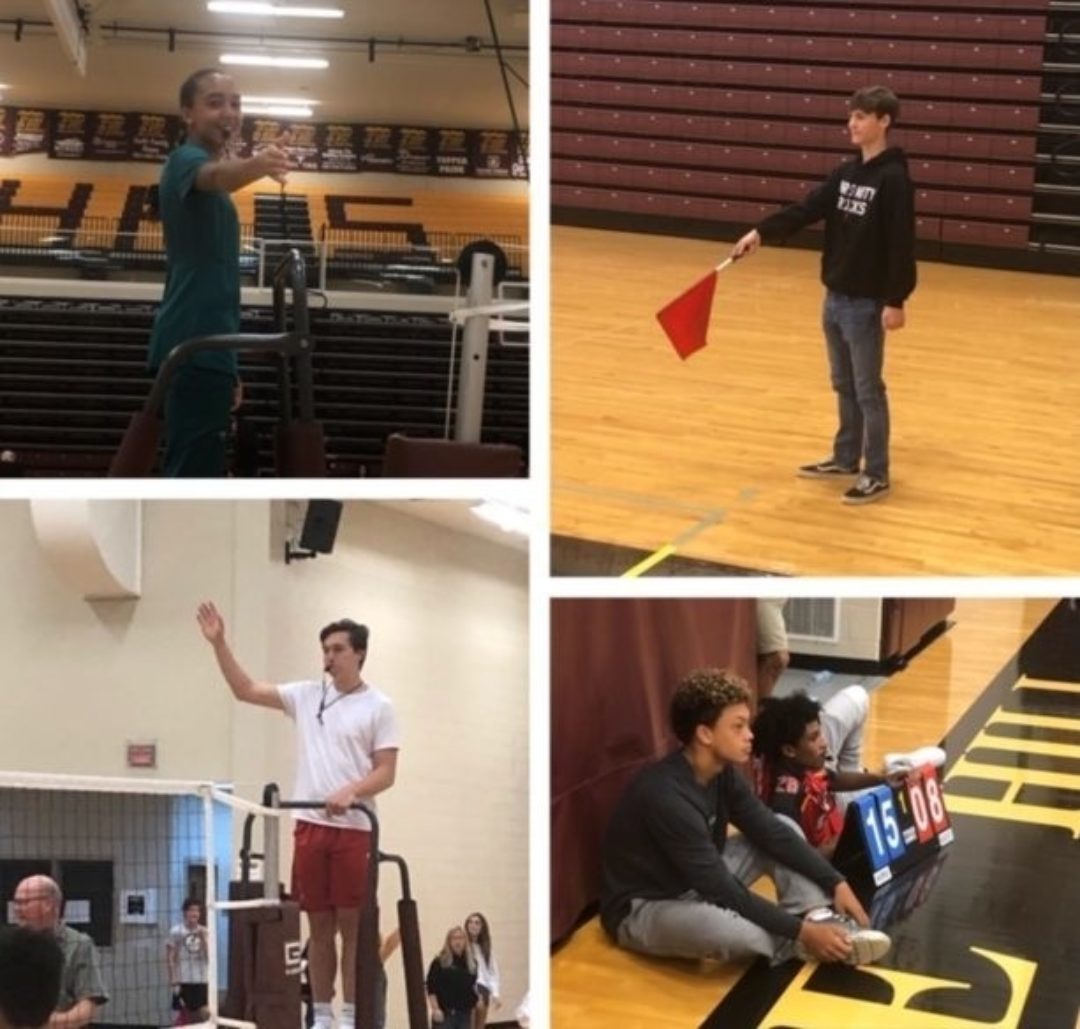 “We talked in the spring and asked about officiating class and said we thought it would be a good idea with the shortage of officials, nationwide,” Whaley said of Science Hill leaders’ discussions with the state. “And there would be some hands-on experience to be an official or work with the Parks and Recreation Department. We kind of looked at the Alabama model and that’s where we kind of took it from. We hope it keeps growing.”

“We sent it in last spring, but the lady asked me to call her. She was a former track athlete and she asked me why we didn’t have track officiating in our curriculum, and I said, ‘It might be something we expand,’” Turner shared. “We may do certain sports the first semester and certain ones in the spring. The State Department was very receptive to it. I think it will spread to other schools.”

Students already are getting practical application; their classroom during a recent week was a volleyball court.

“We actually officiated some volleyball in P.E. and had one student who did the lines for a J.V. and freshman volleyball game,” Whaley said. “The response has been great.”

The professional instruction is going to reach an even greater level in the coming days and weeks. Science Hill is tapping into the knowledge and experience of northeast Tennessee’s bank of officials, as well as relying on its close-knit relationship with Johnson City officials.

“My thoughts are very positive about it. I’ve been involved in officiating for years and I think I’ve talked with people at Science Hill and David Crockett [which could add a similar course], and most of the athletes that you have are going to leave high school and never play sports again, probably,” said veteran official Ron McEwen, pastor at First Church of God in Johnson City and current coordinator of middle school officials in the area. “We are in desperate need of officials and an officials’ class would be something really beneficial to entice some younger people to get involved. Myself and Lynn Griffith, a retired teacher and official, we don’t mind coming and helping an officiating class and we don’t want to be paid anything.

“I think it’s going to be a good thing, getting students involved in middle school officiating to learn and make a little money and begin to see if they would like to do it more down the road. The kids get class credit as well as learn about officiating. If our association adds even three percent of people who take class, it would be well worth it.”

Turner already is seeing a difference in the crowds at his school’s various sporting events.

“Coach Whaley’s done a lot of work, worked with the TSSAA and the NFHS (National Federation of State High School Associations), secured online rulebooks for all kids to be able to use to study,” Turner said. “It’s a work in progress, but it’s off to a good start. They’re getting classroom work, practical work, and I’ve seen students coming to our games to specifically watch.

“Kids are taking it very seriously. Coach Whaley’s working with some other P.E. teachers, they’ve done basketball already and are in volleyball right now and then they’ll probably do football. The second nine weeks will probably be baseball, softball and maybe soccer. Our students could be potentially exposed to officiating six different sports in a semester. We will have to gauge that.”

If the initial response is any reflection, then Science Hill’s going to need a powerful gauge.