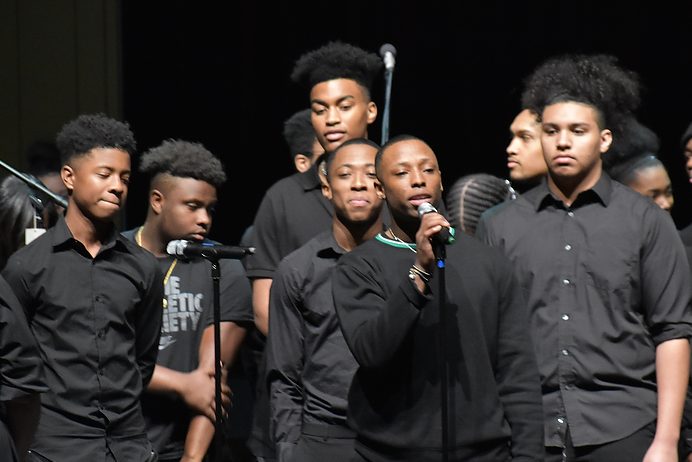 It’s been too hard living, but I’m afraid to die/ ‘Cause I don’t know what’s up there, beyond the sky/  It’s been a long, a long time coming / But I know a change gonna come, oh yes it will”

Hillsboro IB World High School celebrated Black History Month with two days of performances by the Hillsboro Singers and other students who wanted to participate in a celebration with significant cultural importance.

In addition to the two performances, African Americans were recognized each morning through  inspirational quotes.

Black History Month is an annual, month-long celebration of achievements by African Americans and a time for recognizing the central role of blacks in U.S. history.

Since 1976, every U.S. president has officially designated the month of February as Black History Month. Other countries around the world, including Canada and the United Kingdom, also devote a month to celebrating black history

Led by Choral advisor, Janelle Ganske, nearly 50 students worked in class and after school to present a program of reflection and celebration for the entire school population.

Students performed for a 45 minutes show that focused on traditional and culturally important African American song with a few easily recognized modern tunes.

Each performance was a moving tribute of song and spoken word that recognized historical  impact of contributions of African Americans through spirituals, modern performers and praise hymns.

There have been times that I thought I couldn’t last for long / But now I think I’m able to carry on / It’s been a long, a long time coming / But I know a change is gonna come, oh yes it wil”

The performing students sang these songs:

Down to the river to pray –  transcribed by  native Nashvillian, , George H. Allan and published  in the Slave Songbook of 1867

How Great Thou Art – Hymn by Carl Boeburg

(You Make me Feel like a )Natural Woman – Co-written by Gerry Goffin and Carole King; popularized by Aretha Franklin

Change is Gonna Come  – Written and performed by Sam Cooke

My Black Is – Spoken word written and performed by senior, Caleb Ellis

Heaven Help Us All – Written by Ron Miller; originally performed by Stevie Wonder

For Every Mountain – Written and originally performed by Kurt Carr

It Is Well – Hymn written by Horatio Stafford; music composed by Philip Bliss.

The Color Purple – From the musical, The Color Purple; Based on novel of same name by Marsha Norman; music and lyrics by Brenda Russell, Allee Willis, and Stephen Bray.