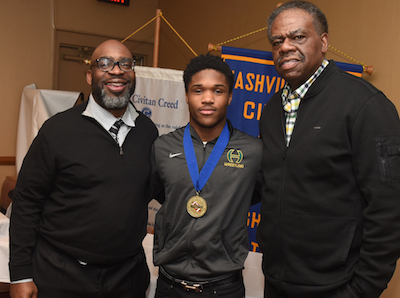 “We recognize this group of young student-athletes that have displayed true character, dedication and sportsmanship all while playing the sport of football.” - Nashville Metro Schools Athletic Director Roosevelt Sanders

Wednesday, Nashville Civilian Club, an organization devoted decades of work to the development of character of young people through the Greater-Nashville community presented what many recognize as one of the finest awards a young man or woman can receive – the AD Hancock-Walter Nipper Sportsmanship Awards.

The Hancock-Nipper Sportsmanship Award is presented annually to high school athletes from Davidson County region champion (or better) who not only possesses outstanding athletic abilities but also embodies a moral character and has demonstrated sportsmanship throughout his or her athletic career.

The award is named after two long-time members of the Nashville City Civitan Club: A.D. Hancock, a highly-respected administrator and Walter Nipper, owner of Nashville Sporting Goods, who contributed much to the Nashville community.

The recipients of the Hancock-Nipper awards are determined by coach vote and given to those who display true character on and off the field and a dedication to sportsmanship.

These awardees are exemplar examples of the culture that athletics can contribute to a school environment.

Darian Williams, a two-sport athlete who just finished competing at the TSSAA State Wrestling Tournament is the 2019 Hillsboro High School Nipper Awardee. He is a student of the Audio, Visual and Broadcasting pathway of the Academy of International Business and Communications.

We recognize this group of young student-athletes that have displayed true character, dedication and sportsmanship all while playing the sport of basketball,” Nashville Metro Schools Athletic Director Roosevelt Sanders said.