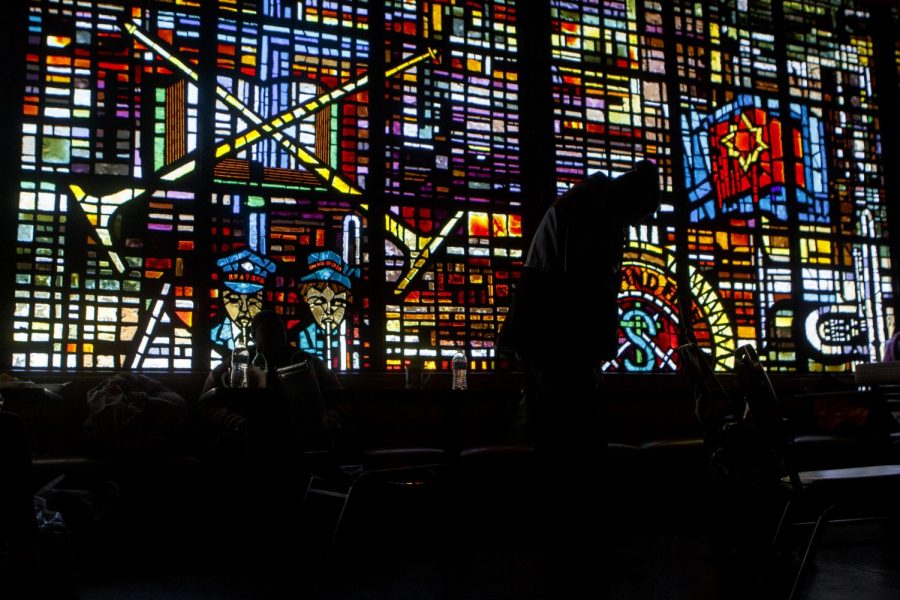 William Kennemer, standing, gets ready to go back outside at The Salvation Army on Monday, Jan. 21, 2019, in Chattanooga, Tenn. As part of the Martin Luther King Jr. Day of Service, the Southern Adventist University hosted a "Street Store" that allowed people needing free clothes to come and "shop" by browsing items hung up around The Salvation Army property. Students acted as personal shoppers helping those in need pick out clothing. Food and music was also provided inside. (C.B. Schmelter/Chattanooga Times Free Press via AP)

NASHVILLE, Tenn. (AP) — A civil rights leader gave an impassioned speech in front of thousands as he urged Tennessee Republican Gov. Bill Lee and others in attendance to not just love Martin Luther King Jr.’s legacy but act.

The House State Government Subcommittee rejected House Joint Resolution 583 on Wednesday without any explanation. The vote, taken by voice,

“I’m going to take them at their word,” Clemmons told reporters late Wednesday afternoon, and said he had not been asked by Democratic leaders to back off his new resolution.”

Turning to directly address Lee and other elected officials, he said “it is time to put down the partisanship and do what is right.”

Among other issues, Barber called for universal health care and a living wage for the poor. Lee is against expanding Medicaid in Tennessee and raising the minimum wage.

A Lee spokesman says, “Freedom allows for different opinions, and that is what makes this country the special place it is.”

In 2018, Clemmons backed a similar resolution but it quickly died in the House after failing to secure a second motion in a subcommittee. A Republican lawmaker then introduced a slightly tweaked version, only for that proposal to also be killed shortly after.

Clemmons, who is running for Nashville mayor, has since said he  won’t push his resolution due to the House’s voice action.

“I’m going to take them at their word,” Clemmons told reporters late Wednesday afternoon, and said he had not been asked by Democratic leaders to back off his new resolution.

However, the Nashville lawmaker expressed regret the House took a voice vote over a roll call vote because it robbed the public from knowing who exactly supported the proposal.

Clemmons added that Republican lawmakers have resisted efforts to remove the bust of Nathan Bedford Forrest — a Confederate general, slave trader and early Ku Klux Klan leader — currently on display in the Tennessee Capitol lobby between the House and Senate chambers.

Forrest was famous for his exploits as a Confederate cavalry general who had amassed a fortune as a plantation owner and slave trader in Memphis before the Civil War.

So far this session, there has been no legislation calling for the removal of the contentious bust.