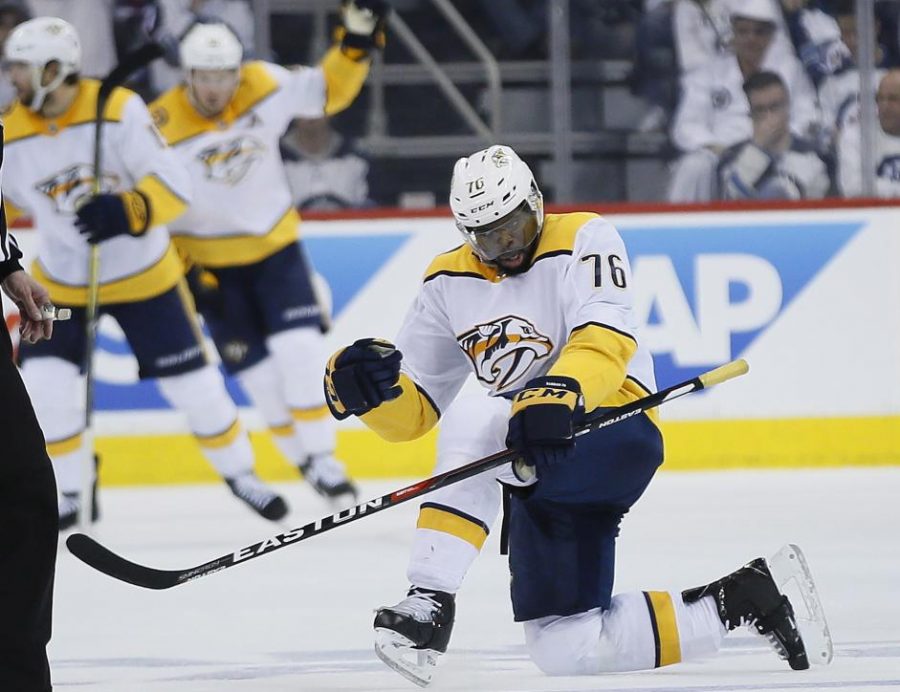 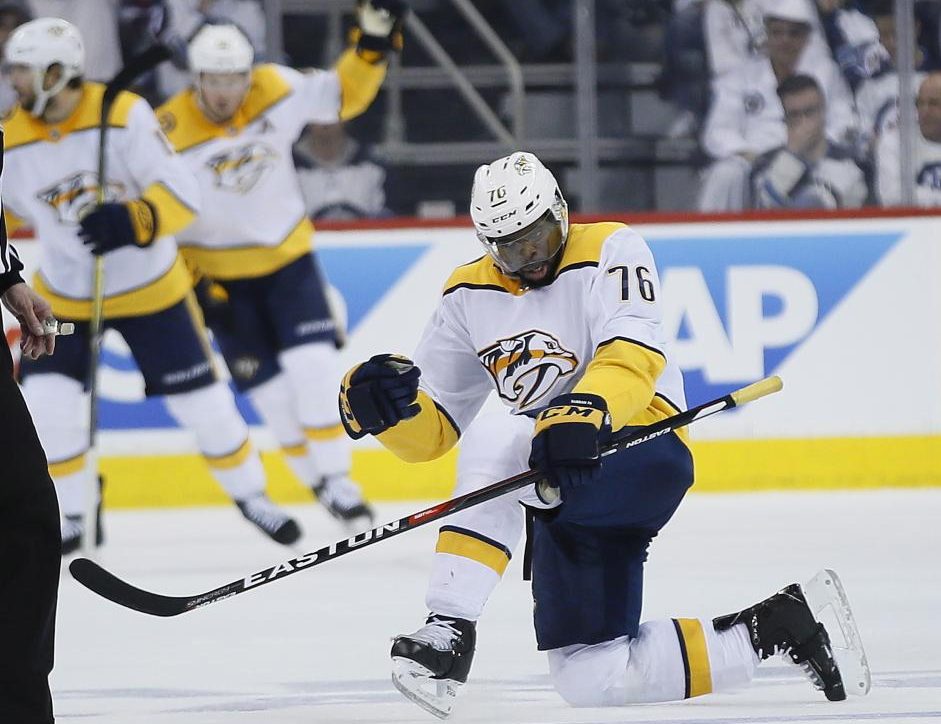 WINNIPEG, Manitoba (AP) — Pekka Rinne made 32 saves, P.K. Subban and Ryan Hartman scored and the Nashville Predators held off a late charge by the Winnipeg Jets to win 2-1 on Thursday night and even their second-round series through four games.

Patrick Laine, after a full three periods of frustrated stick banging on the ice, scored off a face-off in the final minute, but Nashville’s Nick Bonino won two key face-offs after that to end it.Connor Hellebuyck stopped 27 shots, but Nashville snapped Winnipeg’s 13-game home winning streak, which dated to March 2.Rinne allowed five goals amid a series of defensive miscues in a 7-4 Game 3 defeat.

He rebounded impressively behind a team that was much sharper in its own end.The Jets found far less space in the neutral zone, but also saw a couple of golden opportunities bounce over their sticks.

Laine is experiencing his first playoff series of his career, and every round is a first for him. His frustration grew in the 4th game as the checks were closer and every player on both teams had to work that much harder because with each playoff game the intensity increase. Laine was seen arguing with the referees, throwing his stick into the ice, and spent a good portion of the game complaining until his score late in the 3rd. 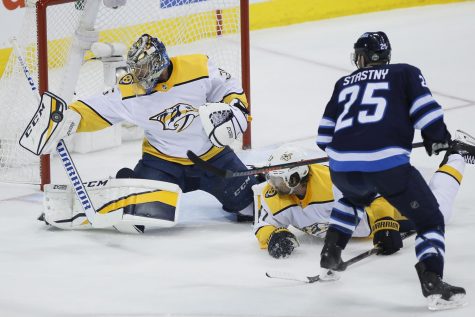 A shot by Winnipeg Jets’ Paul Stastny (25) is stopped by Nashville Predators goaltender Pekka Rinne (35) as Scott Hartnell (17) defends during the first period of Game 4 of an NHL hockey second-round playoff series in Winnipeg, Manitoba, Thursday, May 3, 2018. (John Woods/The Canadian Press via AP)

The Predators led 1-0 after the first period and stretched their lead with 5:24 left in the second when Subban blasted a one-timer on Nashville’s first power play.Booed by the thunderous white-clad crowd every time he’s touched the puck the last two games, Subban seemed to feed off the noise. It was Subban’s third goal of the series after being held without one in the first round.

The Jets had a couple of great chances to tie it earlier in the period. Kyle Connor missed on a pass from Bryan Little in the slot on a power play, and Mark Scheifele let the puck skip over his stick on a 2-on-1 with Blake Wheeler moments before Subban silenced the crowd with his goal.Laine scored on a 6-on-4 with 50.2 seconds left in the third — his third of the playoffs and first of the series — but the Predators held on from there to wrestle back home-ice advantage.

Nikolaj Ehlers was back on the Jets’ top line alongside Scheifele and Wheeler after switching spots with Connor following Tuesday’s disastrous opening 20 minutes when Winnipeg fell behind 3-0. Connor once again skated with Laine and Paul Stastny.Nashville opened the scoring with 2:40 left in the first when Hartman scored his second of the playoffs off a scramble in front.

An attempted clear by Winnipeg’s Ben Chiarot in front instead went off defense partner Tyler Myers and directly to Hartman, who beat Hellebuyck up high.The teams traded chances earlier in the period, with Hellebuyck stopping Roman Josi and Scott Hartnell on 2-on-1 breaks, while the butt end of Rinne’s stick stopped Josh Morrisey’s backhand chance along the ice at the other end.

Notes: The Jets inserted winger Joel Armia into the lineup after he missed the first three games of the series with an upper-body injury.

Rookie forward Jack Roslovic was a healthy scratch. … Hartnell stepped in for Kevin Fiala, who scored in double overtime for Nashville in Game 2.