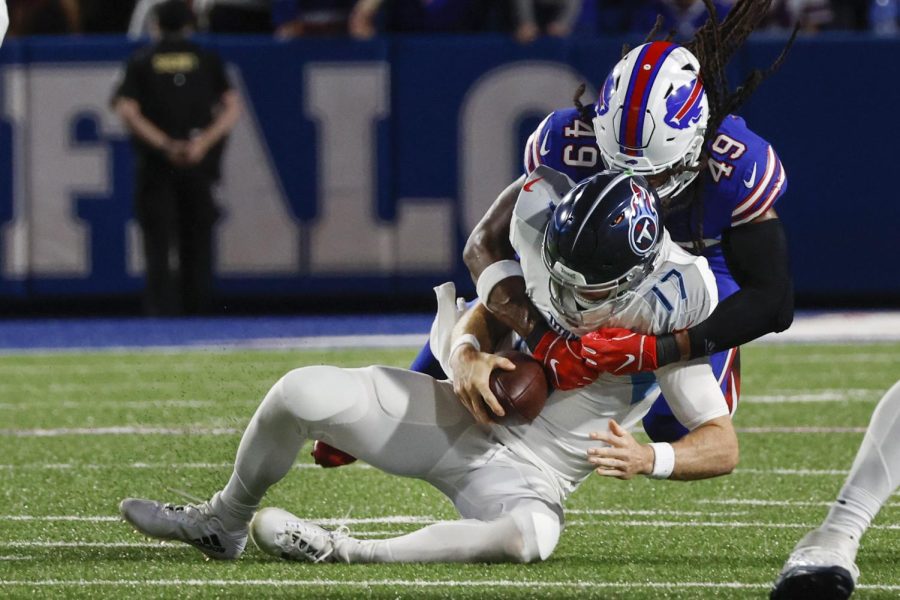 Tennessee Titans are blown out by Bills on Monday Night Football

ORCHARD PARK, N.Y. (AP) — The Tennessee Titans are 0-2 for the first time in a decade, and reeling from their most lopsided loss in five seasons under coach Mike Vrabel.

Something needs to change for a team that had the best record in the AFC last year.

Tennessee was routed 41-7 by the Buffalo Bills on Monday night as its the Derrick Henry-led offense continued to sputter. The Titans’ defense leaked yards against the pass a week after being run over by Saquon Barkley and the New York Giants in a 21-20 season-opening loss.

“We got our (butts) kicked, plain and simple,” Vrabel said.

Quarterback Ryan Tannehill called it a “brutal night” for Tennessee.

“This one’s tough to swallow,” said Tannehill, who was 11-of-20 passing for 117 yards with two interceptions, the second one ending his night after it was returned for a touchdown by Matt Milano.

“But you can’t sit around and have the woe-is-me attitude,” Tannehill added. “You have to be able to turn the page and get some things fixed.”

Though some fans might suggest a change at quarterback is in order after Tannehill was yanked in favor of rookie third-round pick Malik Willis, Vrabel said he was merely being cautious and protecting his starters — Henry included — from injury after the Bills broke the game open by scoring 24 points in 6:29 span of the third quarter.

“Nobody wants to go out there and lose that way,” Vrabel said. “But I’m also a realist and I understand where we were at and the situation that we were in and try to take out some guys that I feel like are going to help us win next week.”

Only two of the Titans’ 11 drives finished in Bills territory as the offense mustered 187 yards, its fewest in four seasons, and 12 first downs.

Henry, a two-time rushing champion who had 143 yards in last season’s win against the Bills , managed 25 yards on 13 carries, his lowest output since 2018. Henry rushed 21 times for 82 yards against the Giants.

“I can’t really focus on what happened in the past and how I started,” Henry said. “I’ve got to be better. I pride myself on being a leader on this team. I got voted captain, and I have to hold up my end of the bargain.”

Henry said the Titans’ success this season will be determined by their response to early adversity.

“We definitely don’t want to play like this again,” Henry said. “We just need to play better. That’s all there is to it. It ain’t good enough. Hasn’t been good enough. And we need to be better. No excuses.”

Tennessee’s defense was no better, allowing the Bills to rack up 414 yards. The unit didn’t force any turnovers and sacked Josh Allen only once.

Stefon Diggs torched the Titans’ secondary, catching 12 passes for 148 yards and matching a career high with three touchdowns. The Bills were without starting receiver Gabe Davis, but it hardly mattered.

“We felt like we were going to have to make them earn everything,” Titans safety Kevin Byard said. “We did it sometimes. But then in that second half, we really didn’t make them earn anything. They were taking shots all down the field. Miscommunications in the secondary and things like that. They did a lot of things that we just didn’t handle right.”

Even midway through the third quarter, when the Titans forced the Bills to punt for the first time this season, they couldn’t keep Buffalo off the scoreboard.

Kyle Phillips muffed a punt for the second week in a row, and the Bills recovered the ball at the Titans 20, leading to Tyler Bass’ 37-yard field goal.

A week after being one play from beating the Giants after Randy Bullock missed a 47-yard field-goal attempt wide left as time expired, Tannehill noted the Titans were many more plays away from having a chance to beat Buffalo.

“Can’t make it out to be more than it is,” Tannehill said. “But have to be urgent in getting things turned around. We have no time to waste.”