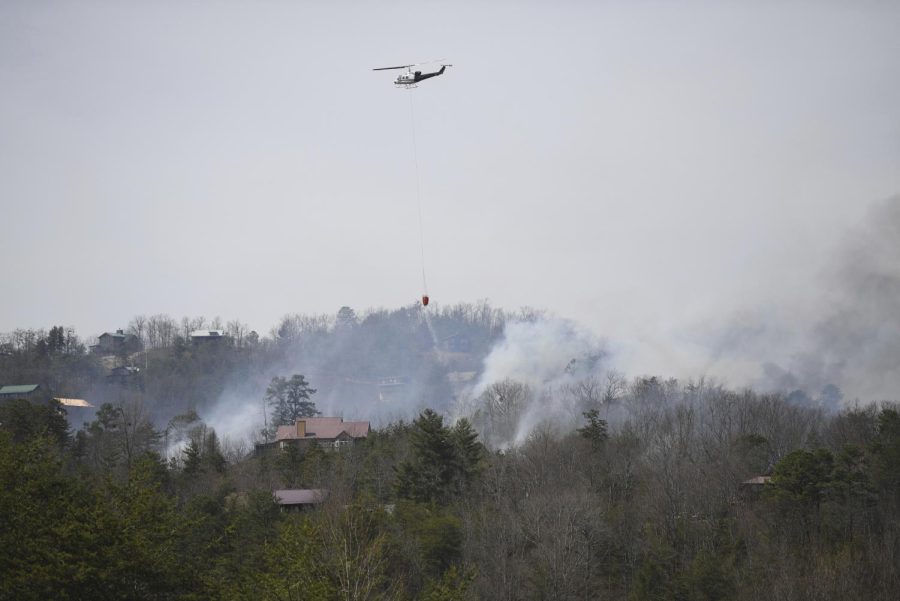 A helicopter dumps water onto a wildfire Wednesday, March 30, 2022, in Sevierville, Tenn. Firefighters sought to get a handle Wednesday on a wildfire spreading near Great Smoky Mountains National Park in Tennessee, amid mandatory evacuations as winds whipped up ahead of a line of strong storms forecast to move in overnight.(Caitie McMekin/Knoxville News Sentinel via AP)

PIGEON FORGE, Tenn. — Residents worry that the wildfire contained newr the Great Smoky National Park in East Tennessee may be become uncontrollable like they did in 2017.  Firefighters from across Tennessee continued working Thursday morning to contain a wildfire near the Great Smoky Mountains National Park that spread overnight despite rain from storms that passed through the area, officials said.

The blaze, which began as a brush fire Wednesday morning in the Hatcher Mountain area of Wears Valley,  near Sevier County had spread to more than 3,700 acres (1,497 hectares) and had impacted more than 100 structures, Sevier County Mayor Larry Waters said during a press conference. Around 11,000 homes in the area had been evacuated. Three injuries were reported during the blaze, but Waters said no fatalities or missing people had been reported.

He said a coordinated response from emergency personnel, firefighters, forestry officials and others helped mitigate damage in the area.

“This fire could have been much more devastating had we not had this team in place. They were able to, even with the winds and the low humidity, they were able to stay ahead of it as much as possible,” he said.

Officials had warned early Wednesday that warm temperatures, low humidity and strong winds increased the risk of fire danger. Waters said the conditions were similar to those in 2016 when wildfires ravaged the tourism town of Gatlinburg, killing 14 people and damaging or destroying about 2,500 buildings.

Firefighters from more than 70 agencies helped respond to the blaze and many worked through the night in an effort to keep it from spreading. It was only 5% contained, but fire lines drawn overnight helped keep the blaze from spreading into the city of Pigeon Forge, Waters said.

Rain early Thursday from storms passing through did not put the fire out, but officials said it helped the situation and the current weather conditions were more favorable for containing the fire.

Evacuation orders remain in effect until the fire is under control. Schools in the area were closed Thursday as a precaution, officials said.

The fire was in what the state Agriculture Department described as steep and difficult terrain. The cause is still undetermined.

A line of severe storms packing isolated tornadoes and high winds ripped across the Deep South overnight, killing at least t.wo in the Florida Panhandle, toppling trees and power lines and leaving homes and businesses damaged as the vast weather front raced across several states.

To read more …. Remembering the 2016 fire in Gatlinburg